Which material works best for which application...

I often get asked this question:  Which is better to use for my natural building, strawbale or cob?

The answer is simple: IT DEPENDS!  (of course!)
To help sort out if strawbale or cob walls are better suited for your application, I'm going to describe the basic properties of each material, and then how to use those attributes to your greatest advantage.

STRAWBALES insulate.  And they are thick, so they insulate really well.  What this means is that a wall built of strawbales slows down heat energy traveling from one side of the wall to the other.  A good insulator acts like a down jacket that keeps your body heat inside the jacket instead of getting disbursed to the cold winter air.  A well-insulated house will use less energy to heat in winter than a poorly insulated house, because the insulation keeps the heat inside.  If you use an air conditioner in summer, insulation will keep the heat outside, so again you need less energy to keep cool.


COB is a thermal mass because of its principal ingredients: clay & sand.  Cob has limited insulating properties.  Instead, a thermal mass is like a storage battery for heat (or cool) energy.  This means cob is good at absorbing heat energy from the sun or a fire and storing that heat.  When the air temperature around the cob is lower than the temperature of the cob itself, it releases its battery storage of heat into the air.  In this way, cob can absorb a lot of heat energy and then release the heat over time, long after the heat source is gone.  Conversely, a shaded thermal mass with no heat input will stay cool in the summer and absorb heat energy out of the warmer air around it (thus having a net cooling effect).


So how to best use these characteristics to your advantage?
The answer depends on your climate and what you are building.  If you are using energy to change the inside temperature and keep it something different from the outside temperature, then you generally want a good insulator...ie, strawbales.  If you live in a mild climate where the temperature swings are day-to-night instead of seasonal, then a thermal mass exterior wall generally will help to average out those temperature swings...ie, cob.  Thermal mass can also provide a highly beneficial interior element in conjunction with passive solar design, to capture heat from the Southern sun in the winter (when the sun is low) but remain shaded when the summer sun is high in the sky.

I use a combination of strawbale and cob.  Because I design for a climate that requires several months of heat in the winter, I use the insulating strawbales for exterior walls.  This ensures that only a minimum amount of energy is needed to heat the spaces and the heat stays inside.  I then position some cob element to the interior.  Either it surrounds a wood-burning heat source or it is positioned so that low winter sun shines on the wall from the South.  That same cob element is shaded and cool in summer.  This way the cob helps to regulate the interior temperature in both winter & summer. 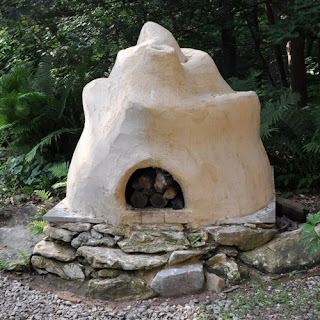 Build a Clay (Cob) Oven in Your Yard!

How to build a wood-fired pizza/bread oven using local natural materials If you are looking for a small project to get your hands (and feet!) dirty testing out some natural building skills, then building a wood-fired oven is a great place to start.  If you have a little help, it takes just a couple days to build, then a few weeks to let it dry out (during which time, you can sculpt your oven to any shape), and then you're ready for a pizza party!! What is a cob wood-fired pizza oven??  Well...it's a baking oven that is heated by lighting a fire inside, the fire warms up a thick clay oven wall, and the clay wall remains warm for hours after the fire is pulled out.  So you build the fire in the same oven area that becomes your baking space.  The beauty of this type of oven is a) the oven is simple to build using local, natural materials and b) the oven temperature remains very even throughout, with no hot or cold spots.  Plus, it's a fun project to do with a bunch of peop 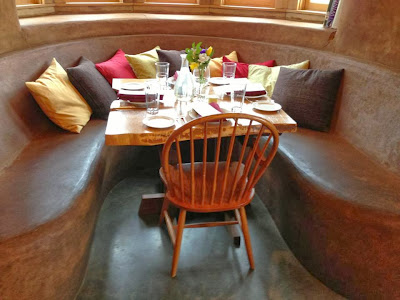 Love the look of a cob bench but not sure if clay will be comfortable to sit on?  Comfort is more about ergonomics than the surface material.  A cushy couch can be uncomfortable, which a wooden chair can be superbly comfy.   The difference...they key...is how the body fits on the seat. cob bench at Black Ankle Vineyard's Tasting Room the I designed & built in Maryland Here are some tips for building an ergonomic, comfortable bench: The height of the seat should allow you to sit with your feet flat on the ground in front of you.  Otherwise the lip of the seat will cut off the circulation in the back of your thighs and your legs will fall asleep.  15 to 17 inches high is about right for most people. The depth of the seat should be deep enough but not too deep.  If it is too shallow, then you are literally sitting on the edge of your seat.  If it is too deep, then you can't sit back comfortably against the backrest.  14 to 18 inches deep is about right for most pe 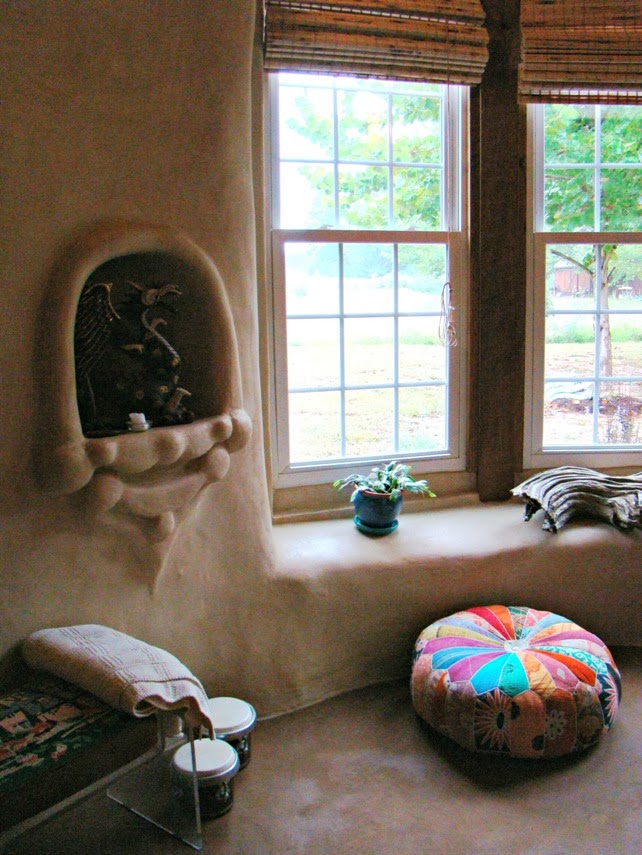 Adobe Floor Basics - How to build a dirt cheap floor

Seems crazy, right?  A dirt floor, of all things!  Well, time for a perception shift... Adobe floors are lusciously beautiful and quite durable.  And best of all, in most regions they can be made from local clay soil.  (Which makes them dirt cheap...sorry, couldn't resist.) adobe floor in a strawbale cottage in WV The Concept An adobe floor, or earthen floor, relies on the sticky binding properties of clay...one of the most versatile building materials I know of.  Clay expands when wet, creating sticky platelet particles, like a bunch of suction cups.  Add to the clay ample course sand, to increase compressive strength and control shrinkage as the clay dries.  Finally add fiber, to increase tensile strength and knit everything together, like reinforcing bar in concrete.  The finish mix is essentially the same as adobe or cob.  And the installation is similar to a concrete slab, only without the environmental impacts or cold nature of cement. What I describe below is